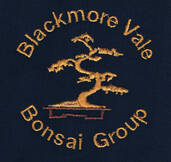 About Us
The Blackmore Vale Bonsai Group was formed on 12th October 2007 by five enthusiasts who do bonsai.
The first meeting was in the United Church Hall in Shaftesbury.
From there we migrated to the Silver Band Hall, but quickly outgrew it and moved to our current home in the Remembrance Hall in Charlton.
We meet on the second Friday each month at 19.30., usually for a workshop.
Each month we have a sales table plus a raffle and a raffle for a tree drawn in December.
We have a competition, Tree of the Month for three classes, novice intermediate and advanced. The competition runs for eleven months from January to November. The awards are made at the December meeting which is the Annual General Meeting and party. The tree raffle is also drawn then.
We will be holding a show in June 2022 and an auction in October 2022.
On the last Saturday each month we have a workshop at Thorngrove Garden Centre in Gillingham.
We have been holding workshops at Guggleton Farm Arts in Stalbridge.
The dates for these vary so watch the Web site for information.
In 2022 we will again hope to be running a two day pottery workshop.
​ The dates will be announced in due course. We attend several shows during the year,